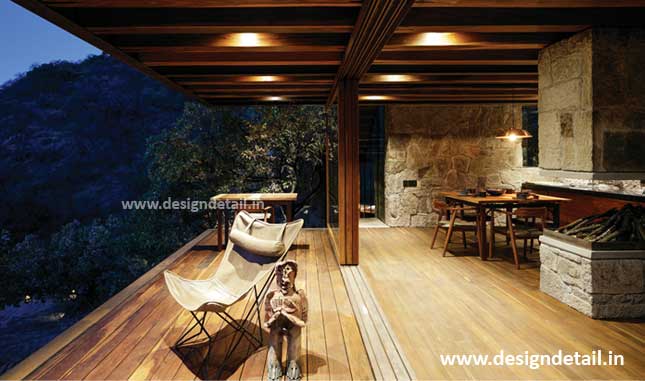 On an undulating terrain, among the oak and copal trees dwells a cabin, a shelter, a cave; silently communicating with nature.

The Teitipac Cabin conceived by the firm LAMZ Arquitectura strikes a dialogue with its neighbours, embedding itself to the south and soaring towards north. This cabin in the woods is located at San Antonio Teitipac, Oaxaca, in Mexico.

The concept is derived from a set of two squares, juxtaposed at acute angles which are crossed by a perpendicular line engaging a sense of rigor and movement.

The rectilinear forms attunes to the undulating landform like two characters ardently watching and engaging with the drama of nature. The varying levels of voluminous exposition invoke a deep sense of harmonic rhythm with the synonymous dramatic landscape.

The main idea of the design was to ennoble the sense of architectural dialogue between the built space and nature. Locally existing materials such as stone, steel and wood infuses and vibrates the whole fabric of space and time, invoking a warm atmosphere.

The timeless quality of the materials enhances the cabin amid the vast landscape. Steel frames cuts, moulds and penetrates through the stone walls forming the spaces in a geometric paradigm.

The horizontal wooden panelled floors in the interiors are annexed into various levels connected by steel stair-paths which later flows out into the exterior stone walkways.

A series of wooden beams runs along the ceiling, directing the dwellers view towards the captivating hills around. The combination of stone, steel, wood and glass work together to encompass the picturesque landscape, like a painting on a canvas that breathes.

A CONVERSATION OF SPACES

Approaching the place from a higher ground is a stone wall walkway that leads to an open terrace that captures the whole site and its surroundings. The first element that strikes a viewer’s eye is the vertical shaft of the fireplace which stands boldly on the terrace.

A series of stairs flanked along the stonewall leads to the entry which dives into the ground; a smooth transition from the open hill into a cavernous living space. The living room is furnished with wooden cosy furniture with a stylized lighting that sparks an exciting contrast with all the materials.

The exterior stone wall continues inside and culminates in a fireplace carved into it, which separates the living and dining space. Both the space opens out to a wooden decked balcony, capturing the serene and enticing landscape.

The space grows further through a series of stairs that leads to another level which are flanked by glass panels on either side, communicating with the outdoor characters.

A sense of exploration and anticipation is created by the walkway that dives into a private living space.

An open bedroom with wooden wardrobes, minimalistic side tables, simple and ergonomic coffee tables and chairs breathes the whole space a sense of harmony, balance and tranquillity.

A silent transition from the bedroom to a large cantilevered balcony captures the whole mystical ambience of the hills.

Office with a view: by Quirk Studio