In the urban sprawl of the multilayered fragmented city of New Delhi, a public walkway has cocooned and fused onto one of the busiest stretches of this megacity.

Connecting four principal streets, it has enlivened as an aid, that is spirally sewed to stimulate and revive a seamless pedestrian movement amidst the suffocating and congested junctions of ITO crossing and “W” point.

It is an amalgamation of various materials integrated together to emerge as an icon conceived as a serpentine tube coiling around the major intersections in a symbiotic transformation of direction and movement in the urban sprawl.

It soars through the sky to commute office goers and other public to various corporate and government buildings in the vicinity such as the ITO, Police Headquarters, PWD Headquarters, GST Office, Supreme Court, DDA Vikas Minar, Lady Irwin College amongst others.

The design program called for a unified response to the area’s burgeoning commuter concerns, especially at the ITO Crossing and the ‘W’ Point Junction which sees maximum pedestrian traffic throughout the day. A network of public transport systems, including the two metro stations, Tilak Bridge railway station, and various DTC bus stops, are major hubs that mobilize traffic flow in that area, especially during rush hour.

The analysis of the existing situation and factors made the designers come up with the solution of a skywalk at “W” point and a foot over-bridge at Hans Bhawan. The reticulated profile of the skywalk; the structural silhouette and the crisscross boot lace trusses that are covered with tensile fabrics serve as a landmark for the city.

The structure has a fusion of materials that strikes a complementing chord with the context such as steel, RCC and red Agra stone cladding.

Octagonal structures are designed near the Supreme Court and Railway colony junction, which features a tensile fabric roof over a steel structure with granite flooring surrounded by a glass railing, fulfilling the functional as well as aesthetic needs of the design. It houses kiosks and seating spaces on the plaza levels with a viewing gallery. 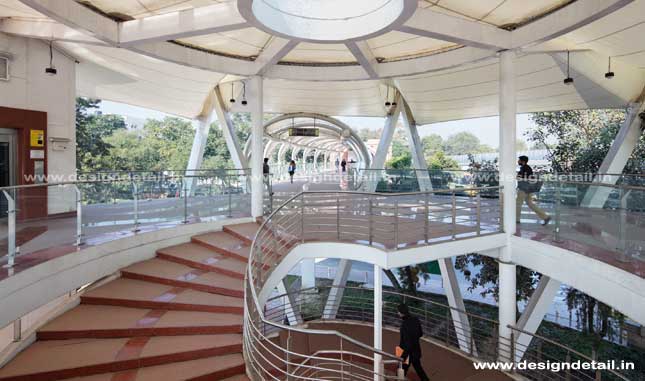 Tensile fabric roof and steel structure members emphasize their form in the junctions exhibiting an architectural sculpture. These structures are surrounded by landscaping, that integrates into the spaces; generating a dialogue between the built and natural. Every junction houses a glass lift that ensures the safety and accessibility of the needs of differently-abled.

The whole walkway is provisioned with Wi-Fi, CCTV cameras and solar panels. Thoughtful and enriching integration of landscape and lighting, incorporating patches of green coalesce with a play of functional and façade lighting, renders the whole bridge enhancing the whole commuting experience.

The deck under the bridge is illuminated using LEDs that provide a sense of height for the chain of vehicles that passes below.

Challenges faced during the construction included circumventing the various existing underground services during the foundation work and bending the structural tubular members into the proposed form to enable assembly. The skywalk has brought a positive character to the existing neighborhood, serving thousands of people daily.

The ITO skywalk has provided the commuters with a sustainable network enabling them to cross junctions in the dense metropolis of New Delhi, serving not only as a mode of commute but also creating rejuvenating experiences through the spaces, thus emerging as a new image for the city.