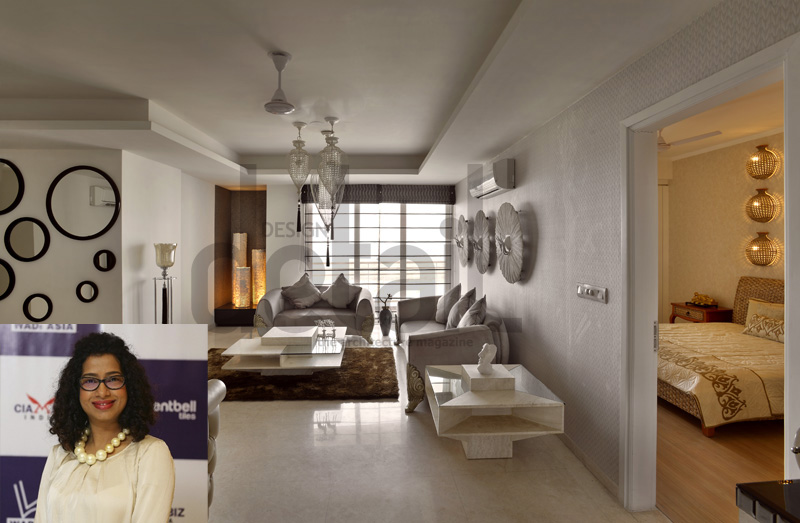 Analogous to the thought penned down by the great artist-inventor Da Vinci years ago, this recently completed project by AVG Architecture en Interiors, aptly portrays the charisma and implementation of a simplistic design sensibility. Entitled as ‘Subtle Charm’; this interior set-up exudes opulence through the crispest usage of light-tones hues, artistic details and harmonious furnishings – that compile together to present its inhabitants with an abode that is low on maintenance yet much in vogue.

Conceptualized to elucidate luxury with the usage of minimal textures and colours, this Gurgaon residence has been designed to function at par with the need of the client. It was envisioned to function as an intermittent habitat for its residents, originally living in Chandigarh, thus had the need to possess elements with the ease of upkeep and yet showcasing an ethereal sense of sophistication. Although minimal in its appeal, the executed scheme is not characterized by its austerity or laconism, rather plays with a cacophony of attributed textures blended with statement pieces and lucid tones. Every aspect of this exquisitely crafted dwelling showcases the idea conceived by the design team, from the entrance to the baroque detailing of the wall patterns, creating a suitable equilibrium between the level of subtlety and magnanimity.

At the onset of the design, an intricately panelled door and a quirky entrance lobby decorated with an array of circular framed mirrors, offer a rather intriguing start to the incoming audience. The glance then quickly shifts onto an enormous living cum dining area, composed of numerous facetted focal points that grasp the user’s attention. Primarily concocted in hues of white and crème, the living space also encompasses three arty wall installations that supplement the needed pointers of creativity. Shades of brown and gold used for the carpet and an adjacent vertical niche, with its longitudinal rustic lighting elements, adds the zest of luxury to this monotoned setting. The adjoining dining, along with containing a marble-top table for six and a side console in white, is accentuated with contemporary pendant ceiling lights, successfully paving the way to a private arena on the right.

Approached from the dining, this bedroom houses a colour combination of warm beige and pious whites. The inclusion of a naturally occurring beige texture, in the form of a wicker bed and wall-mounted lighting installations done in wicker, instil the space with an edgy factor against the seamless unified verticals.

The remaining private areas can be attained from the other end of the dining. A designated family lounge dipped in synonymous shades as the rest of the composition, sprinkle the requisite amount of respiting indulgences with a touch of serene blue. Posing for a black and white semblance, the adjoining bedroom showcases exquisite simplicity with its choice of décor and furnishing, in agglomeration with a statement wall clock and a symmetric cluster of nostalgic captures.

Culminating with space which highlights a speculative representation of the core concept, is the master bedroom. Tranquil tones of white and the alternative golden hues, aid this bedroom to carve the essence of profound ostentatiousness in the minds of its patrons, with indelible ink. The incorporation of heavy upholstered furniture and lustrous décor elements in combination with wooden flooring and patterned verticals; create the apt palate for understated luxury. To bookmark the journey with an amaze-end, an attached balcony has been devised with relaxing furnishing to allow the inhabitants an avant-garde view of the surrounding towering structures, while they sip their evening beverage.

Displaying a simplistic ambience while keeping the ‘posh’ factor at the brink; is the challenge that Archana Van Gils and her team succumbed to deliver an interior design idea that can be noted for its individualistic ideology. A playful presentation of accents and elementary chromas is the neat game plan that gave the clients an abode that possesses an omnipresent ‘humane’ aspect.

An architect, a designer and the founder of an eponymous brand AVG Architecture en Interiors, Archana Van Gils’ primary motivations include a desire for excellence in design. Weaving colour and pattern together, she emphasises on helping clients to find their design identity. The impressions find their home in a concept or a muse that goes with the notions of design that are contemporary, functional yet luxurious. Although her designs are known for their elegance and simplicity, she prefers to journey beyond the principle of ‘minimalism’ and create ambiences that reflect a sense of innovation and vitality.