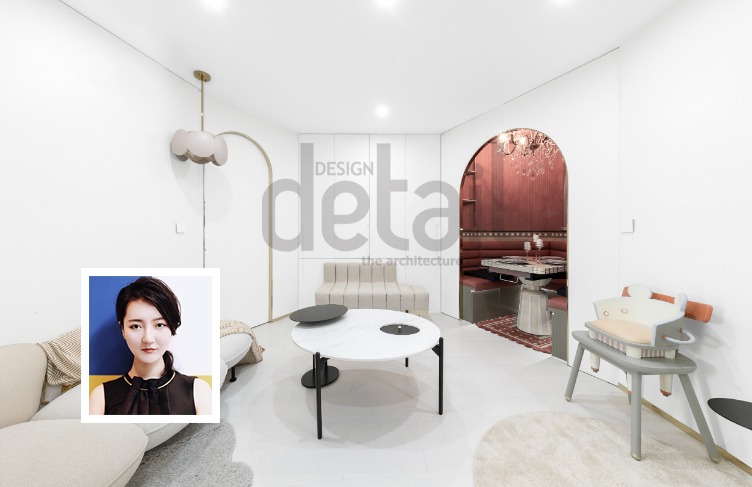 This unique living space was created by designer Li Xiang for a family of four with two kids. The dreamland atmosphere created by the home design comes not only from the fairy tale world created for children but also from the futuristic sense and spiritual shock brought by the challenge on traditional home furnishings.

Not being bound by rigid methods and patterns, the designer disintegrated traditional logic and presented a new interpretation of lifestyle. This design behaviour of seemingly changing an old house into a new one is essentially a designer’s attempt to explore the grand topic of how art intervenes in daily living space, as well as how to build the balance between appropriateness and poetry in the life scene.

The designer removed the original two partition walls in the living room to expand the area through reconstruction. In order to further expand the activity space in the living room, four corners of the space were cut respectively, separated the functional areas originally gathered in one room exactly into the four corners of the space, whose shape at this time became a geometric octagon.

The designer scaled the entire space again and built the four short sides of the wall into cabinets, which are the placement areas for the master bedroom wardrobe, kitchen freezer, and living room lockers. While at the same time, the entrance space of the door also forms a shoe cabinet correspondingly.

The security door at the entrance is just obscured by the newly divided ‘boundary’. The designer cleverly designed a back hall, which not only conceals the visual aesthetic holes but also functions as a delicate and functional ritual hall. And space is still a regular octagon.

The axisymmetrical effect of the octagonal space creates a sense of aggregation and communication between the different functional areas scattered on the four corners. On the long side of the wall, the designer created four arched doorways for different rooms, using four main colours including red, orange, blue, green respectively for decoration. The secret of not monotonous of the living room with high-purity white background is precisely the colour embellishment. The two cold and two warm colours echoes, repels, collides and merges with each other. The designer Li Xiang makes the use of simple solid colours present great effect and interests worth savouring due to her excellent integration capability of the overall space aesthetics.

The doorways not only unified the visual perception, but also forms the exquisite frames for the four “spatial paintings”, and also perfected the designer’s scenery-borrowing design method so that the key scenes can be enjoyed at different points while you can also see the double frame scene with extremely symmetrical beauty.

The octagonal shape of the space is maintained, and each of the geometrically defined “edges” and “angles” is empowered by the designer. This space is shaped on the basis of mathematical thinking and encapsulates the designer’s meticulous logic and amazingly clever application.

The parents’ needs that originally gave way to the children have finally been satisfied. The oblique corner of the master bedroom has become a private space for the parents to drink tea and chat, the entrance to the kitchen and toilet is the dressing room for the hostess. And children’s increasing needs for space coming with the growth have also been properly addressed. The corner staircase has been transformed into a small study room for children to practice the piano and read. The designer learned a wall that not only has storage function but also blocked part of the sight, creating a sense of deepness in the winding path. Ascending the steps, the attic is divided into a boy’s room and a girl’s room, providing separate spaces for children in the home to study, live and play.

Most of the furniture products in the entire home are customized and designed for the whole family. In the clever conversion of the product’s functional variants, the use of space also has different morphological variants. The homeowner can freely change the placement of furniture according to different needs including daily dining, family gatherings receiving friends and relatives, so as to meet the use of diverse scenarios.

The piano stool simulates the form of metronome. The study becomes an imaginary world under the reflection of the mirrored ceiling. The design of the staircase study is full of childlike innocence, proclaiming that it has entered the exclusive territory of children since then.

The boy’s room uses the robot that the little boy loves as the design theme. Through minimalist geometric reorganization and line drawing, it depicts a child-fun room. The girl’s room is based on soft pink colours and uses cute wave patterns as a decorative border on different kinds of furniture, creating a delicate and exquisite dreamy princess room.

Only using a few pure colours for matching and collision, the designer intends to provide a perceptually comfortable experience, rather than a superfluous and force-feeding visual sense. This builds an enlightening growth environment with a hope that children will understand the colourful world through simple colour blocks and thus enrich their imagination.

X+Living, founded in 2011 by Chinese architect Li Xiang, is an international architectural design company with a high pursuit of the perfect integration of artistic aesthetics and practical functions. X+Living takes ‘design creates value’ as the core concept and insists on achieving the highest quality of design works from conceptual design to final completion. The projects, which has involved many fields of business, including parent-child, hotel, office, retail, culture, commerce, etc, had always driven the trend of the industry with high-level design confections and triggered enthusiastic feedback at the phenomenal level in the design industry.